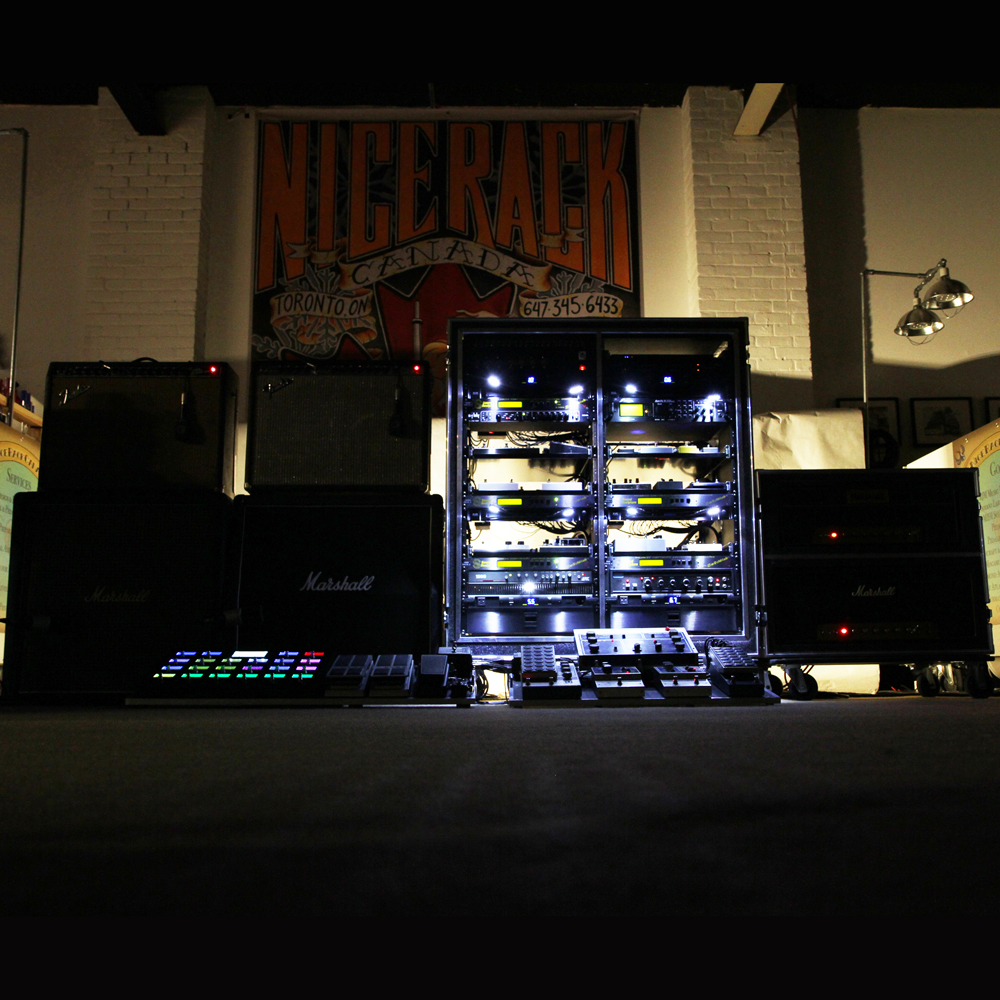 Perhaps the most powerful system we've ever built.. 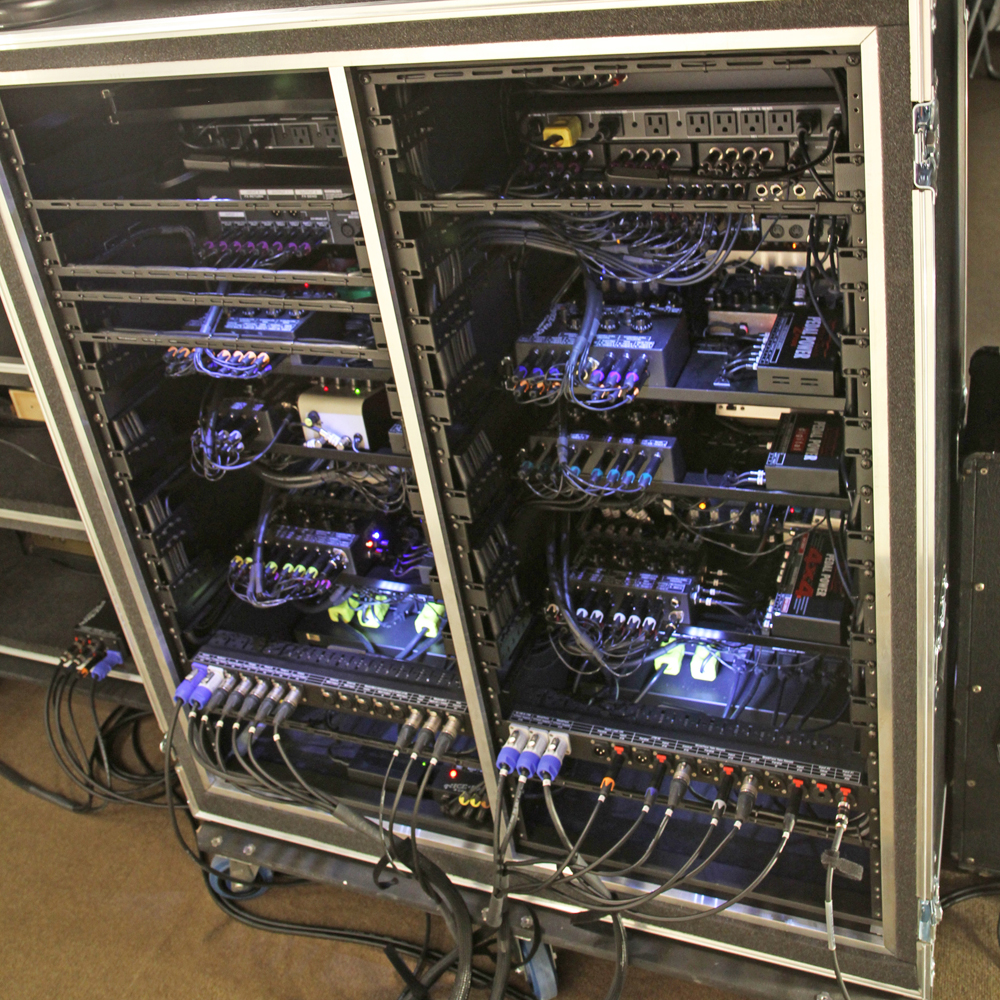 While you gaze at the backside…

Here's some spec's on this sweet system. It's a "Matrix" system, meaning that it has the ability to change all of it's routings on every preset.

The switcher has a software interface that allows you to create an icon for each device and it's corresponding input(s) & Output(s), then using the mouse, connect the rig you want to have at that moment with no extra devices connected to the signal path for the cleanest path possible from pick ups to speakers.

Any order & combination of series & parallel is possible, the possibilities for signal routings are only limited by the player's imagination... 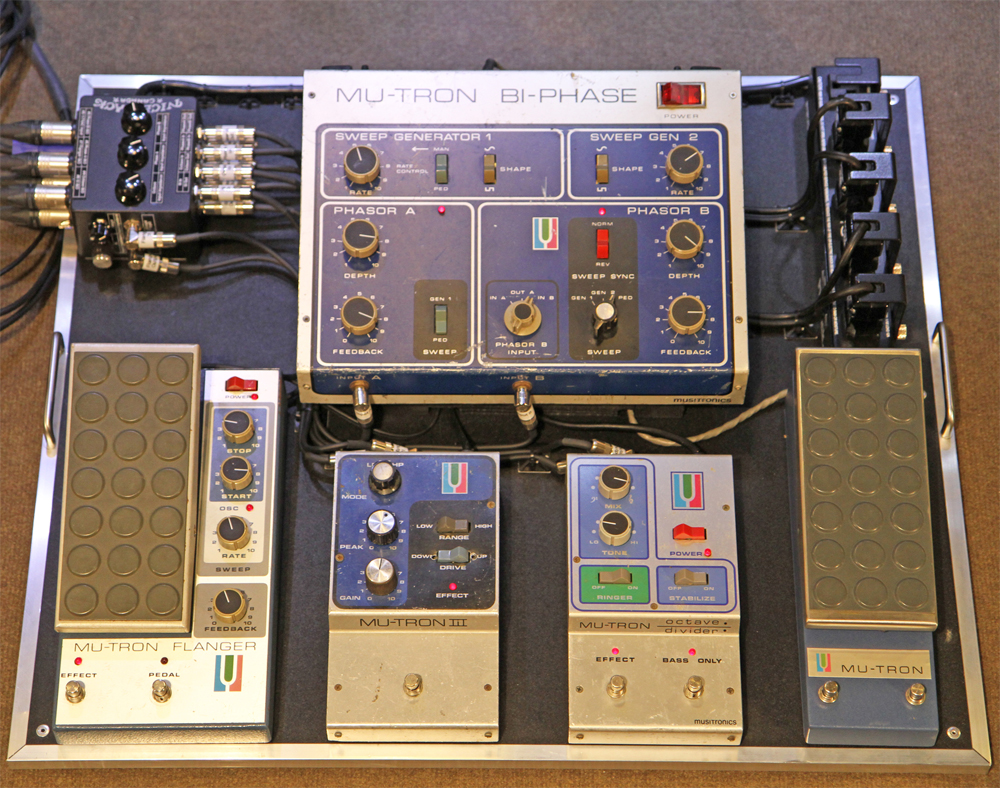 This pedalboard is kind of like a collection of Faberge´ eggs… but infinitely cooler!

This pedalboard is but one of the effects "modules" to the "Infinity" rack system we built for The Rose Room Recording Studio﻿.

This pedalboard has audio connectivity to 3 of the Matrix Switchers in the rack.

The Octave Divider is grouped with the Overdrives & Fuzzes.

The III Filter is grouped with other Filters, Synths, EQ's & Compressors.

The BiPhase & Flanger are grouped with other Modulations.

The latching connection "In & Out" box on the top left also contains a passive Impedance adjustment circuit for each effect device's input.

The Matrix switchers have an Input & Output impedance of 1mOhm, which is nice for loading the output of the guitar or effect device but not always so nice for the input side, particularly for Harmonic overtone type devices.

With this circuit we can sweep the input impedance down to 10kOhm, mimicking the impedance relationship of plugging a guitar directly into the device, while the switcher allows infinite signal flow combinations.

Having your cake and being able to eat it too, is indeed sweet. 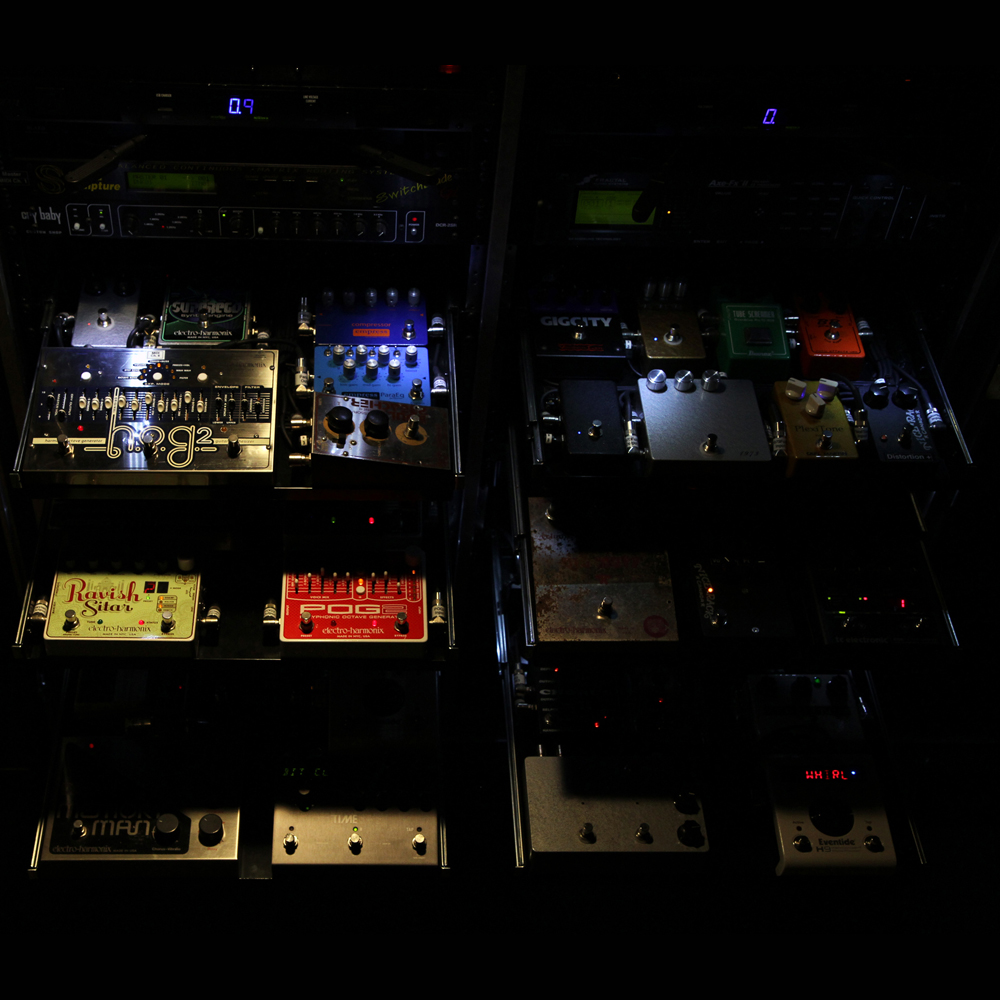 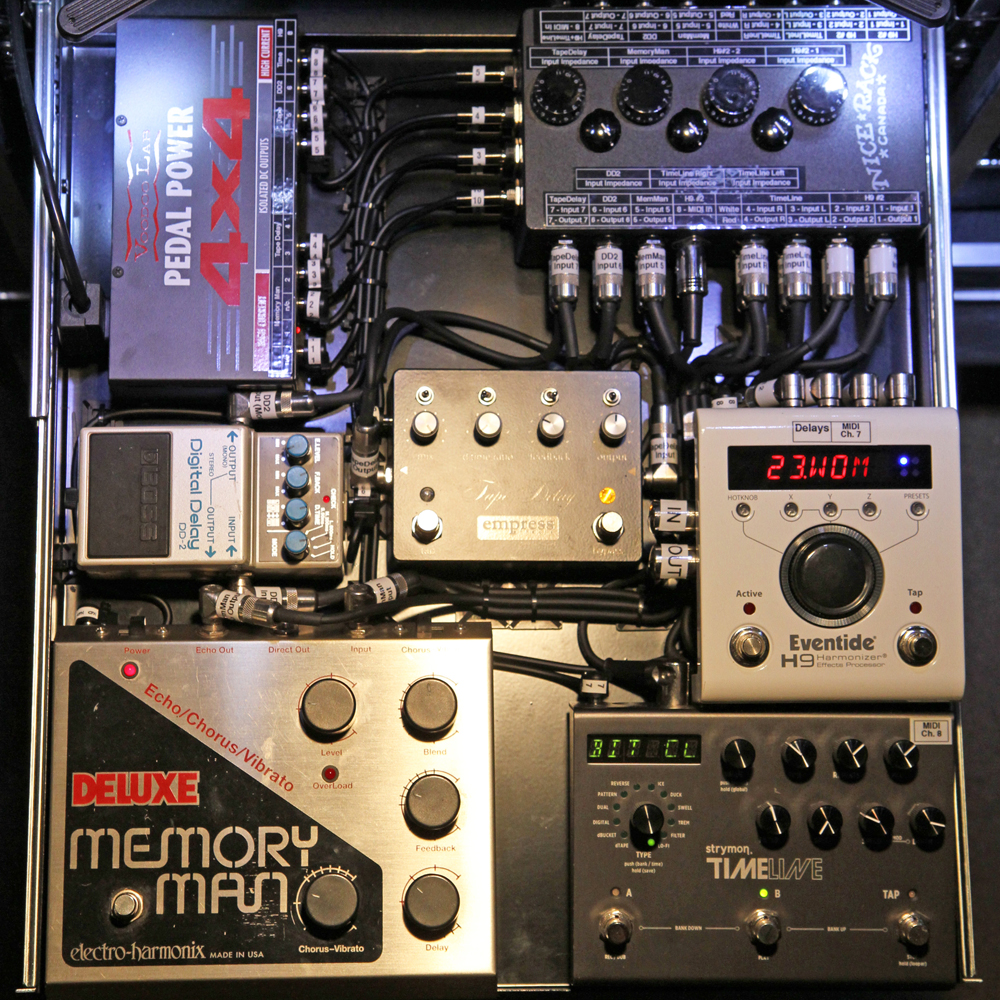 A plethora of ways to have it all come back again, 1 of the Matrix Switchers in the rack is connected to nothing but delay units.

Not pictured but also connected to the Delay Matrix is an ART1500 & the "back side" of an Axe FX II in a 4 Wire Configuration for the Delay, Reverb & Looper blocks.

So much delay, so much time... 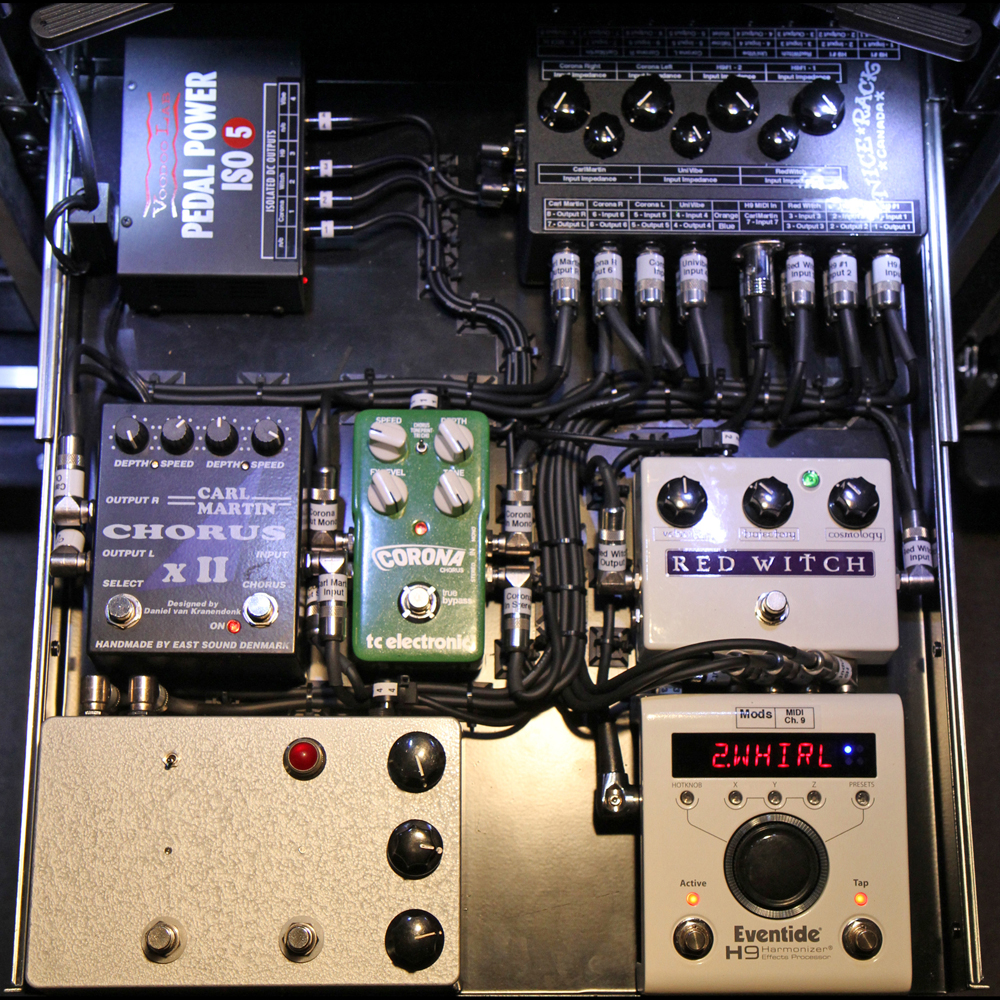 Give it a whirl, watch it twirl. Give it a wiggle, make it jiggle. It's all modulation adulation…

Not pictured here but also connected to the Mods Matrix is the Mutron Flanger & BiPhase on the previously pictured "Mu Board". Also connected is an MXR Flanger / Doubler Rackmount in pristine condition. 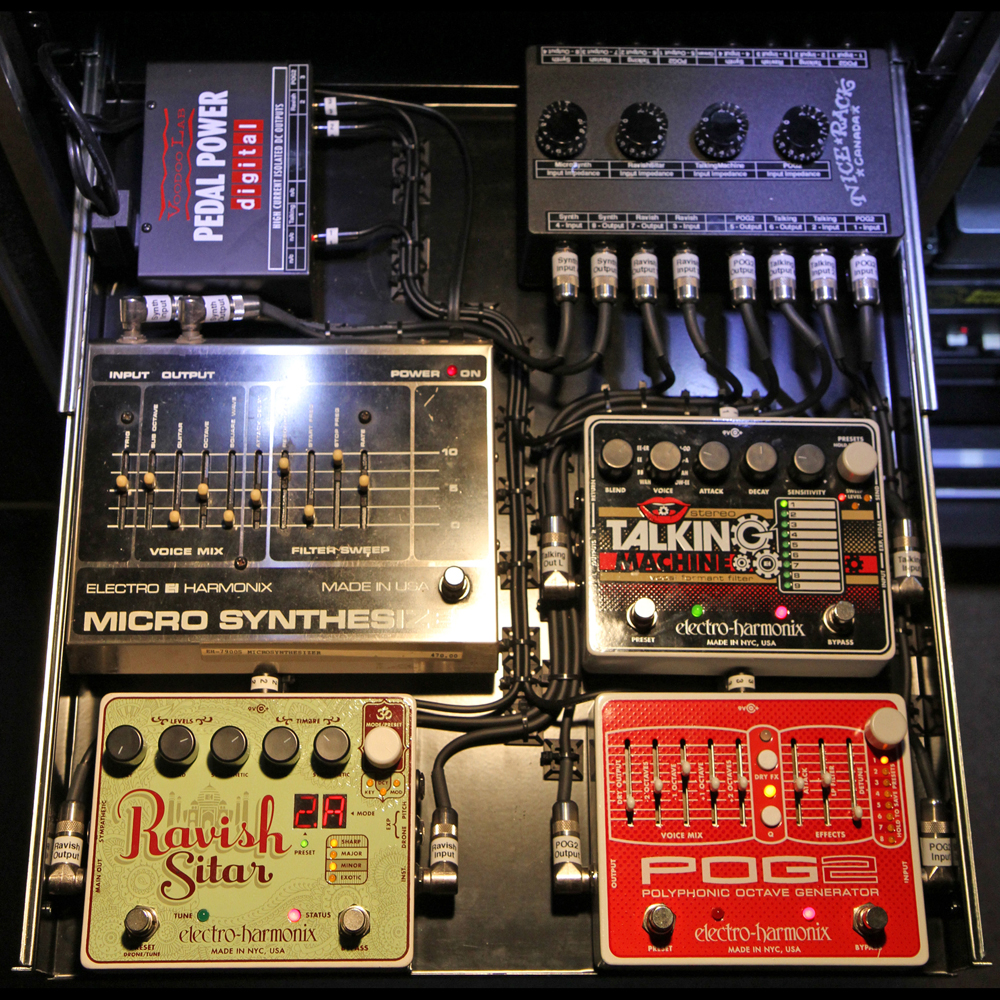 From Queens comes the King of Cool, Mike Matthews should be proud! Connected to the "Dynamics" Matrix in the Infinity Rack System, this drawer features some Electro Harmonix classics, the original Micro Synth, a Talking Machine, drone & sympathetic madness from the Ravish Sitar & one of the most iconic pedals of this century so far, the POG2. 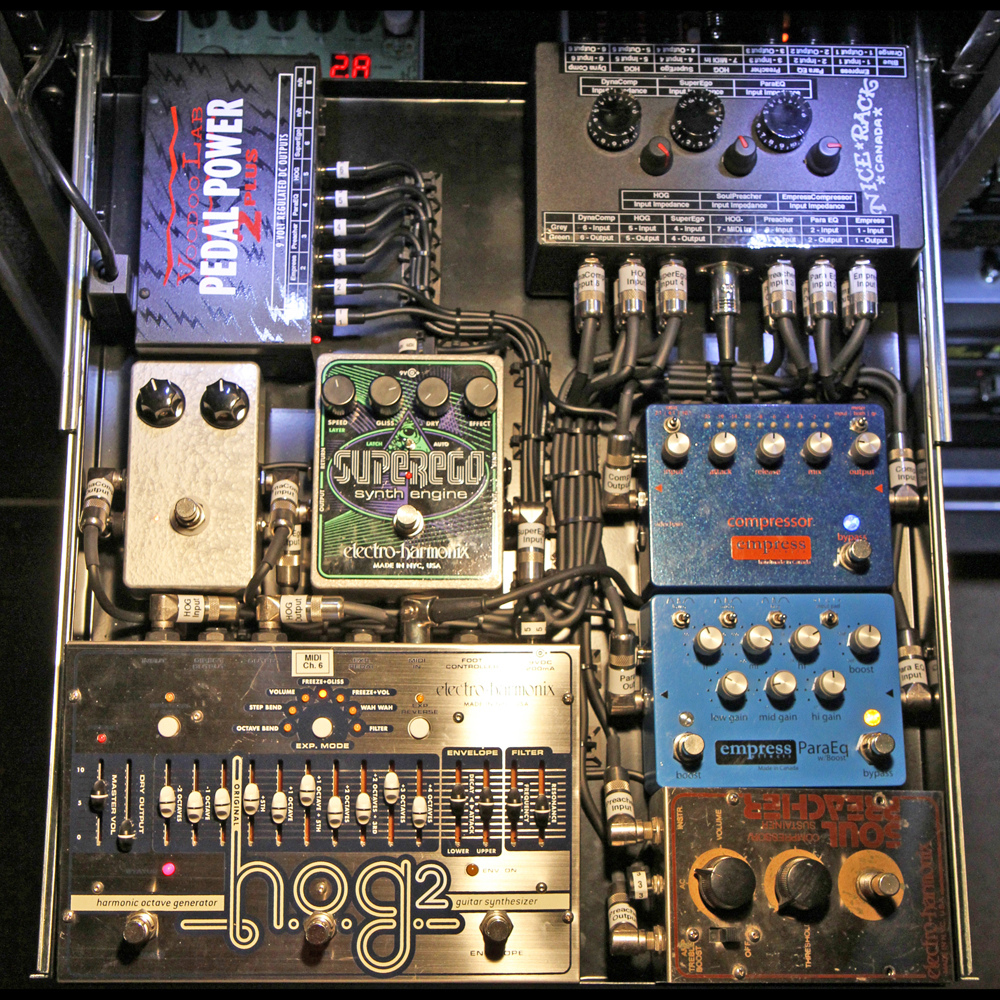 The 2nd drawer of effects for the "Dynamics" Matrix, the switcher where we synthesize & sculpt the signal.

The silver box is a Steve Moratto Dyna Comp.

Not pictured but also connected to this matrix is a Dunlop Rack Wah & Mutron III Filter. 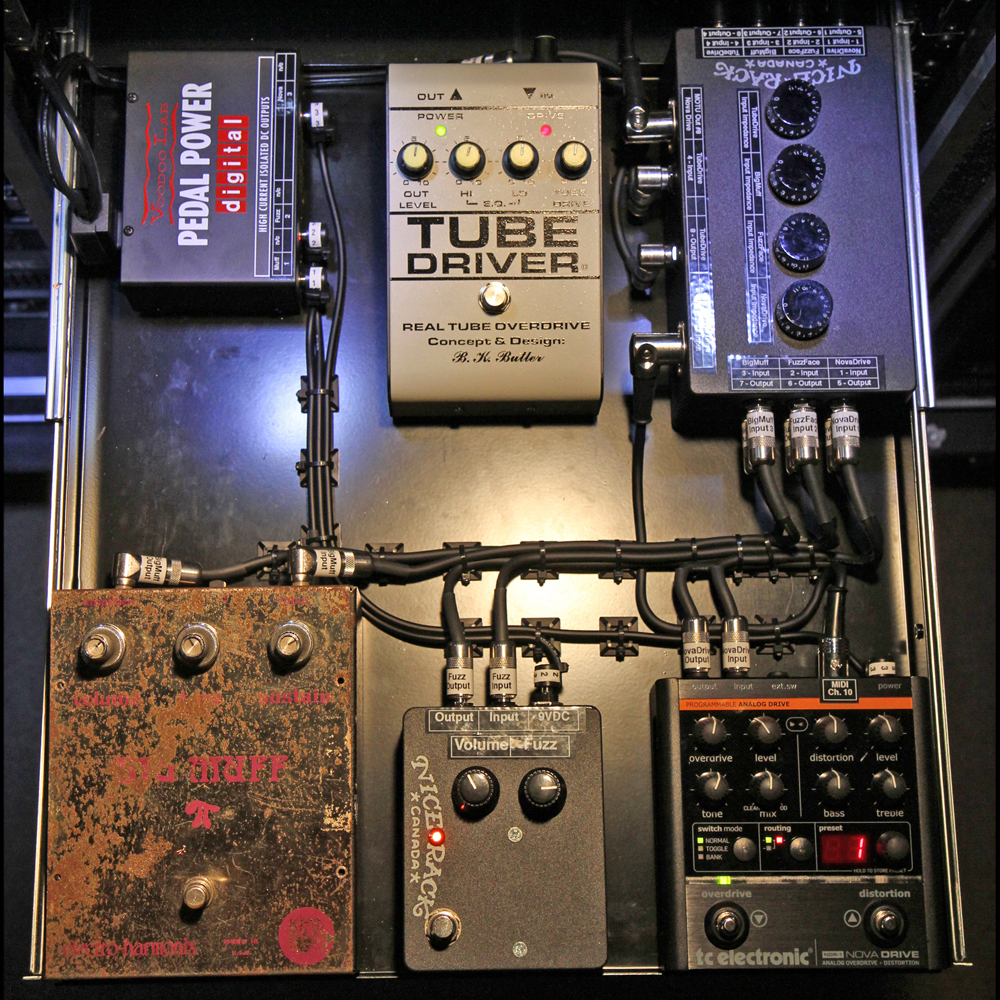 The extended harmonic range of Overdrives, Distortions & Fuzzes can take a track from flat to soaring. Depending on what the song calls for, you need a range of tools available.

In the Infinity Rack System we installed a 16x16 Matrix Switcher chock full of Harmonic flavours. Any combination of stacked & parallel routed "Dirty" & "Clean" signals with level attenuation at each connection is possible and only limited by the imagination.

With multiple connection paths from the Harmonic to Master switchers, assigning different pedals to different amplifiers is a mouse click away, allowing the player to stack multiple tracks in real time with zero compromise in tone or creativity. 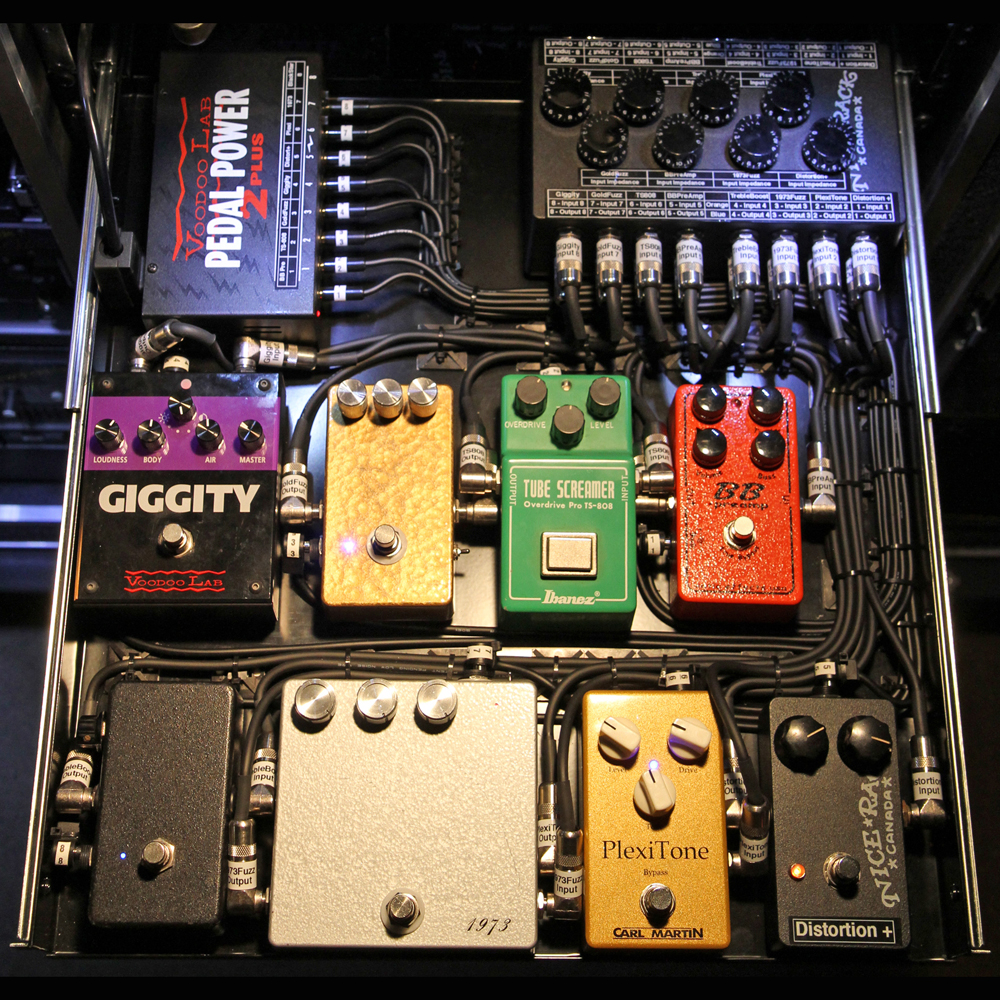 Drive on? Right on!

The 2nd drawer of Harmonic extension devices connected to Infinity Rack System's "Harmonics" matrix switcher. Like the 1st drawer of OD's & Fuzzes this one has some classics and some modern workhorses…

Not pictured but also connected to the Harmonic matrix are a Mutron Octave Divider and a Fractal Audio Axe FX II. 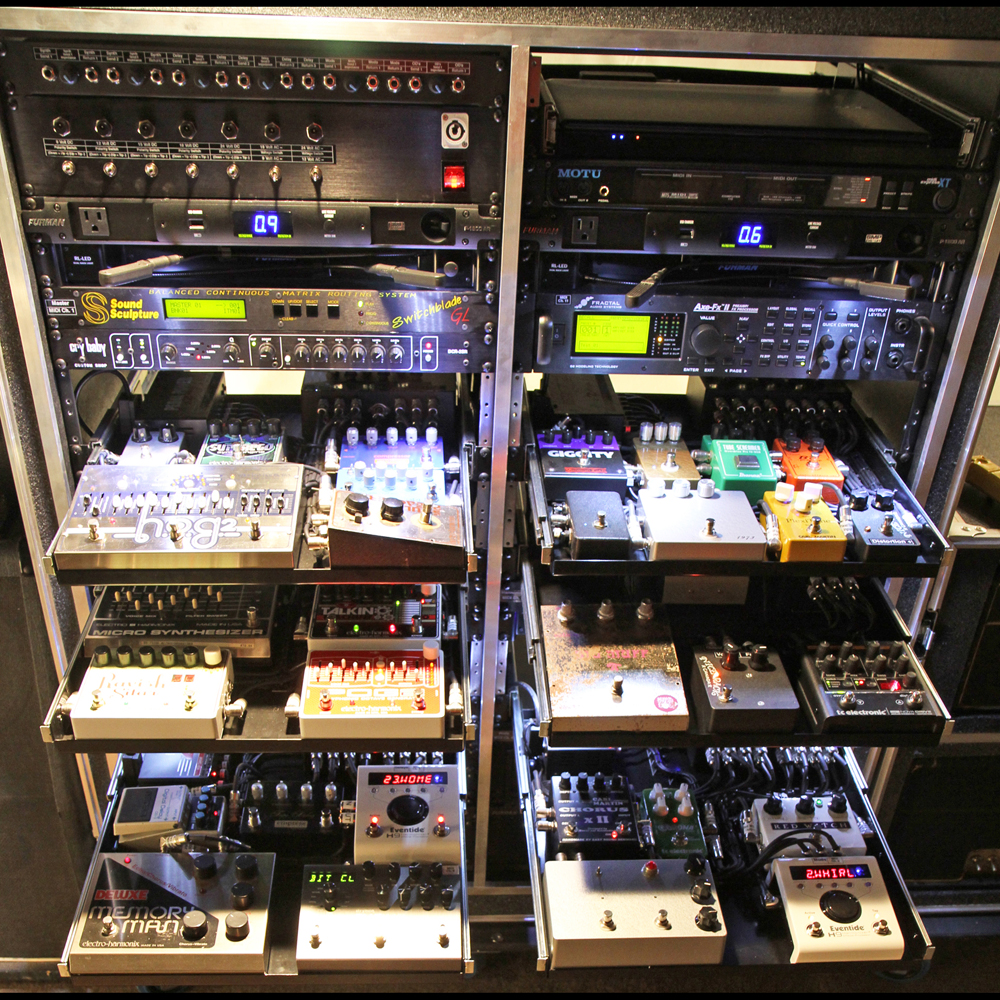 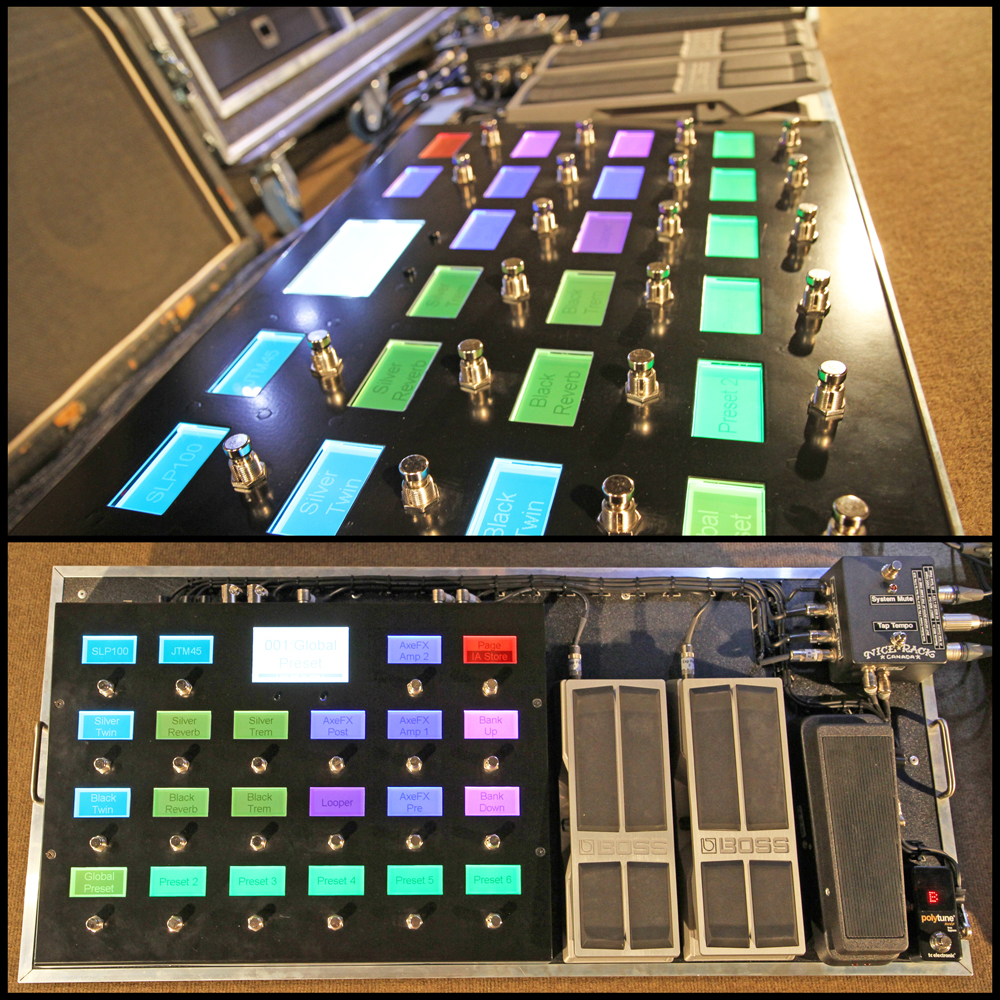 When we were in the design phase of this system, we knew there was really only one MIDI Controller powerful enough to interact with the Infinity Rack, the RJM Music MasterMind GT-22.

Upon completion the system has 154 Instant Access Switches with more than 50% of the system capacity available for future demand.

Complimenting this awe inspiring controller are 2x Boss FV500L Expression Pedals which are mapped per preset to various functions in the system. 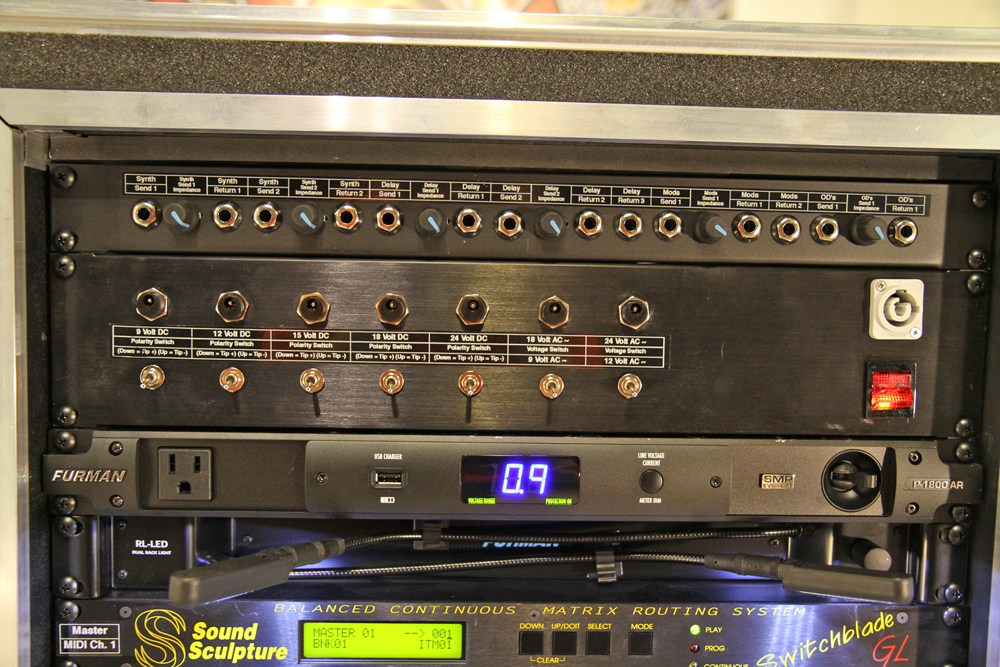 Infinity Rack System is loaded with some legendary classic & modern workhorse effects, but every now & then a need for something else arises.

To quickly implement an external effect device to the system, we constructed a panel that connects to each of the 4 effects matrix switchers, "Harmonics", "Dynamics", "Modulations" & "Delays". The panel also features input impedance adjustment circuits.

To provide for any possible power requirement for the External effects devices we constructed this power supply module that can provide 9, 12, 15, 18 & 24 Volts DC in Tip Positive or Negative polarity all at 2000mA of current.

There are also outputs of 9, 12, 18 & 24 Volts AC at 2000mA of current. Given the vast array of effects devices over the last 40+ years, we thought it beneficial to have a power supply that addresses every single known voltage & current demand. 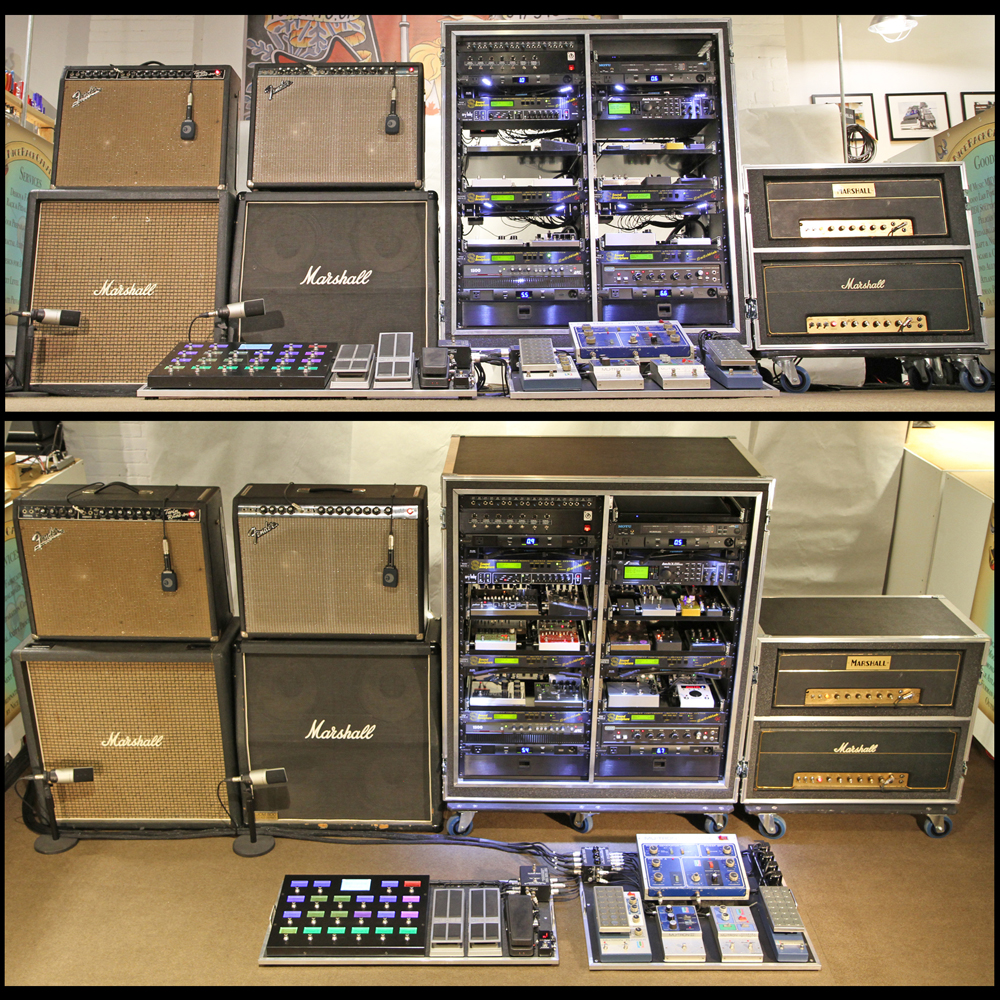 In addition to having tons of classic effects and modern tone tools in the Infinity Rack System, there's some nice amplifiers too!

Both of the important generations of Fender Twin Reverb are on display here. A lovely little Marshall JTM45 & a SLP100 with a history complete the "daily" array. By daily we mean that the amplifier choices to complete the rig also include a Fender "Blackface" Tremolux, TRVR Handwired Little Boy & Plexi, Komet 60, Marshall JTM45 Combo with more additions coming.

The SLP100 was previously owned by Dave Sabo of Skid Row and used on a number of the band's recordings. Perhaps there's a few hits in it for you too. The only way to find out is to book yourself some time at The Rose Room Recording Studio for a session with the Infinity Rack System.

I've uncovered an exclusive picture of Mike at the exact moment the concept of this rig was first brought up...