Nice Rack Canada | A few of our favourite things

Nice Rack Canada | A few of our favourite things 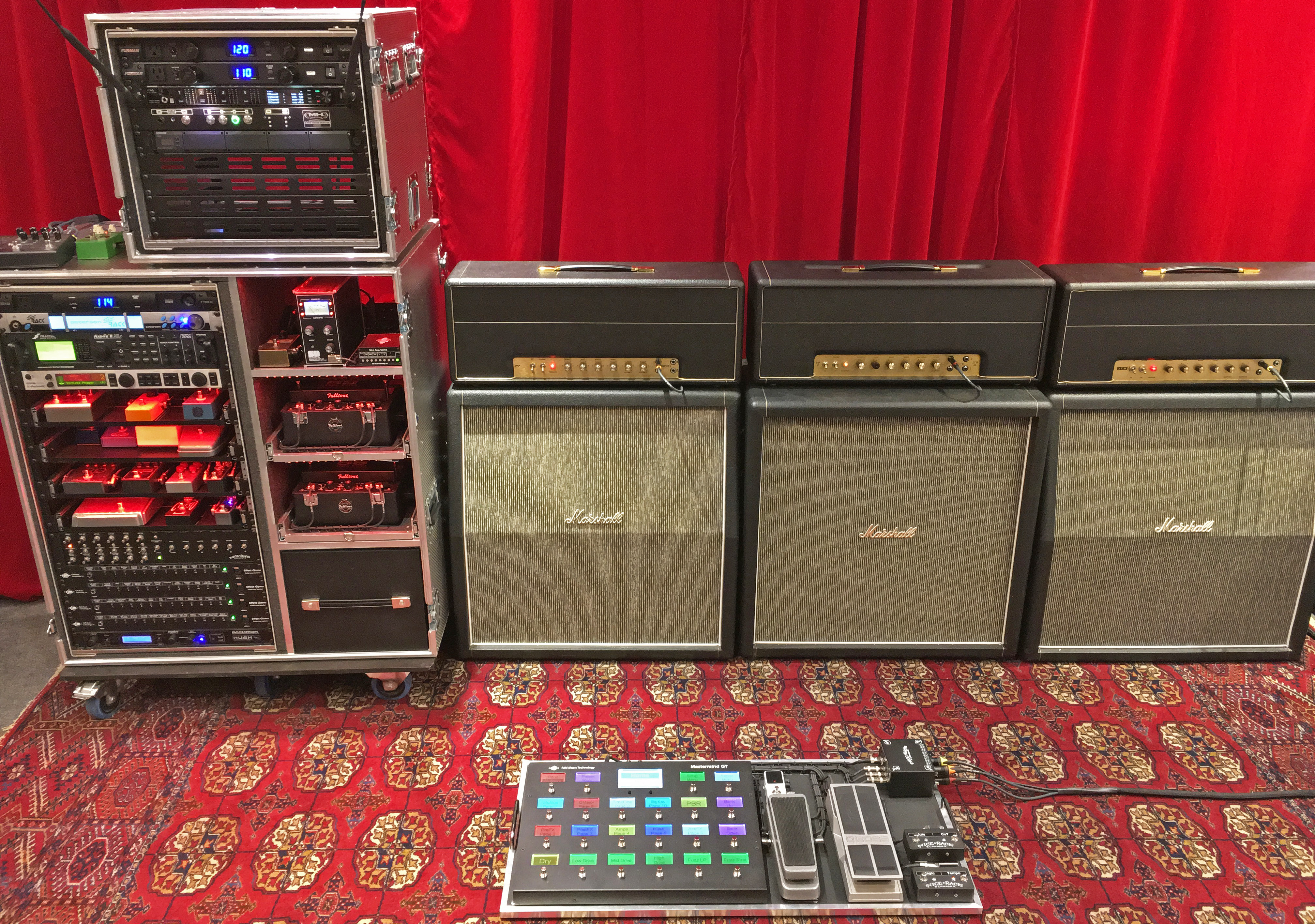 Building guitar rigs at Nice Rack Canada is an enjoyable way to spend every work day, but occasionally things get dialled up a notch, or 3.

A fantastic client recently came to our shop with a few boxes full of his favourite audio tools, wanting them built into a comprehensive guitar rig that could answer any of his creative urges.

The client gave us carte blanche to devise the signal flow and make hardware choices as we deemed fit for the task.

The criteria for the rig was;
We developed this Wet / Dry / Wet system to capitalize on the client’s extensive collection of Marshalls and Marshall clones. Although the client is a dedicated Jimmy Page fan, he does not like the aesthetic of three of Page’s “secret weapons”, Supros, the AC30 & Whammy pedal. Hence we added the Fractal Audio Axe FX II XL+ to cover the Supro, AC30 & Whammy Pedal tones. 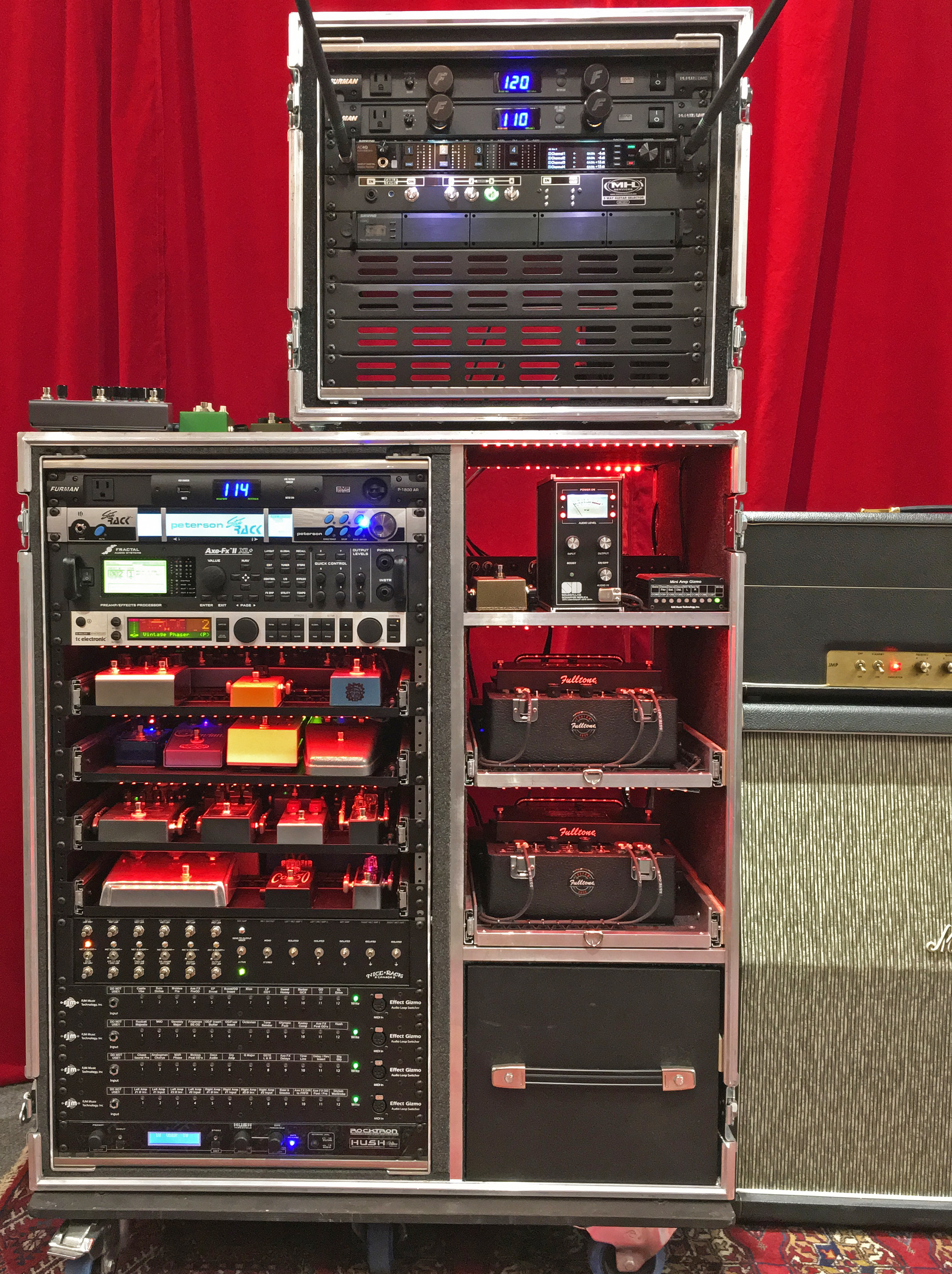 Starting right from the beginning of the signal chain at the guitar we spec’d the Shure Axient UHF system. Switching the input frequencies was the first homage to a hero, the Mike Hill Input Switcher as used by Angus Young.

Sharp eyes may notice that the 3x Furman units are seeing different input voltages. Here’s why. The primary Furman is the P1800AR which regulates output to 120VAC from the 105 to 125VAC input range, this unit powers the Effects Rack & the secondary Furman (PL-8) in the UHF Rack. The PL-8 supplies power to the UHF system, switcher, battery chargers & VariAC. The output of the VariAC supplies the 3rd Furman (PL-8) , which supplies “browned” 110VAC to the Amplifiers. 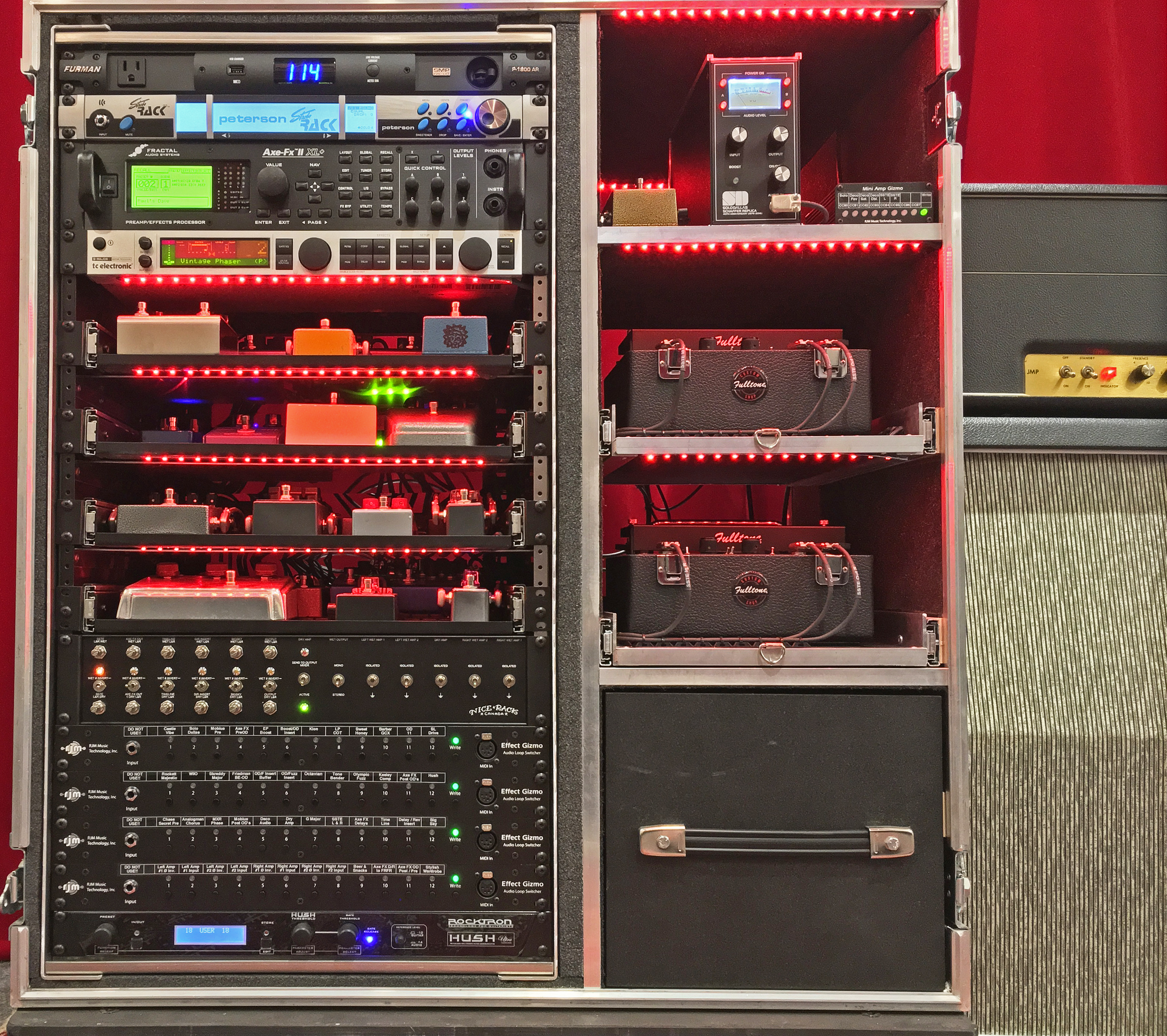 Continuing the homage to heroes a Solo Dallas Shaffer Replica Boost was installed in the system. The companding effect of this boost is truly it’s own unique flavour that must be played through to understand the simple beauty of this tool that helped shape the history of rock n roll.

A 2nd homage can be seen in this photo, a pair of Tape Echoes in stereo. We had pushed for original Maestros, but based on availability had to settle for units pictured made by some jerk in California. As with any product made by the Trumpian pedal cloner who hates Canada, we’ll discount the labour time involved in substituting any of his pieces in any system build. Once we can find the right Tape Echoes in mint condition, the Tape Echoes by Asshat will be gone. 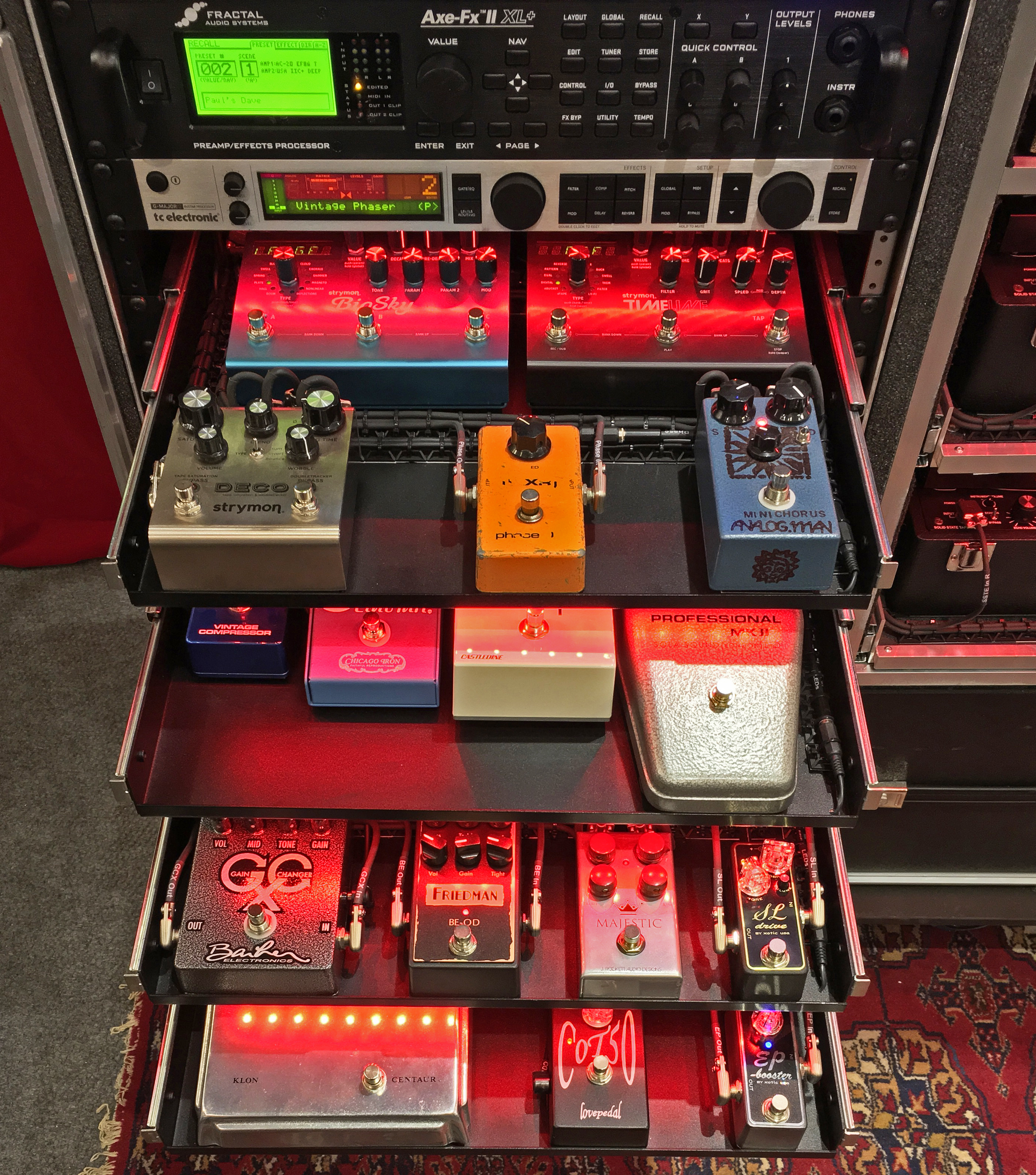 To fully exploit the potential of the Axe FX II XL+’s signal routing capabilities, we have engineered a switching solution using the RJM Music Effect Gizmos to be able to place the Axe FX “pre” connections before or after the collection of analog Boosts, OD’s & Fuzzes.

The “post” connections of the Axe FX on a per preset basis can be routed into the analog Left & Right Wet Amps for effects only presets, or into the FRFR cabinets with Amp & Cabinet simulations in use.

The TC Electronic G Major 2 was chosen for the system to cover the myriad of classic TC Electronic Effects flavours in the most compact & MIDI integrated unit that TC manufactures. 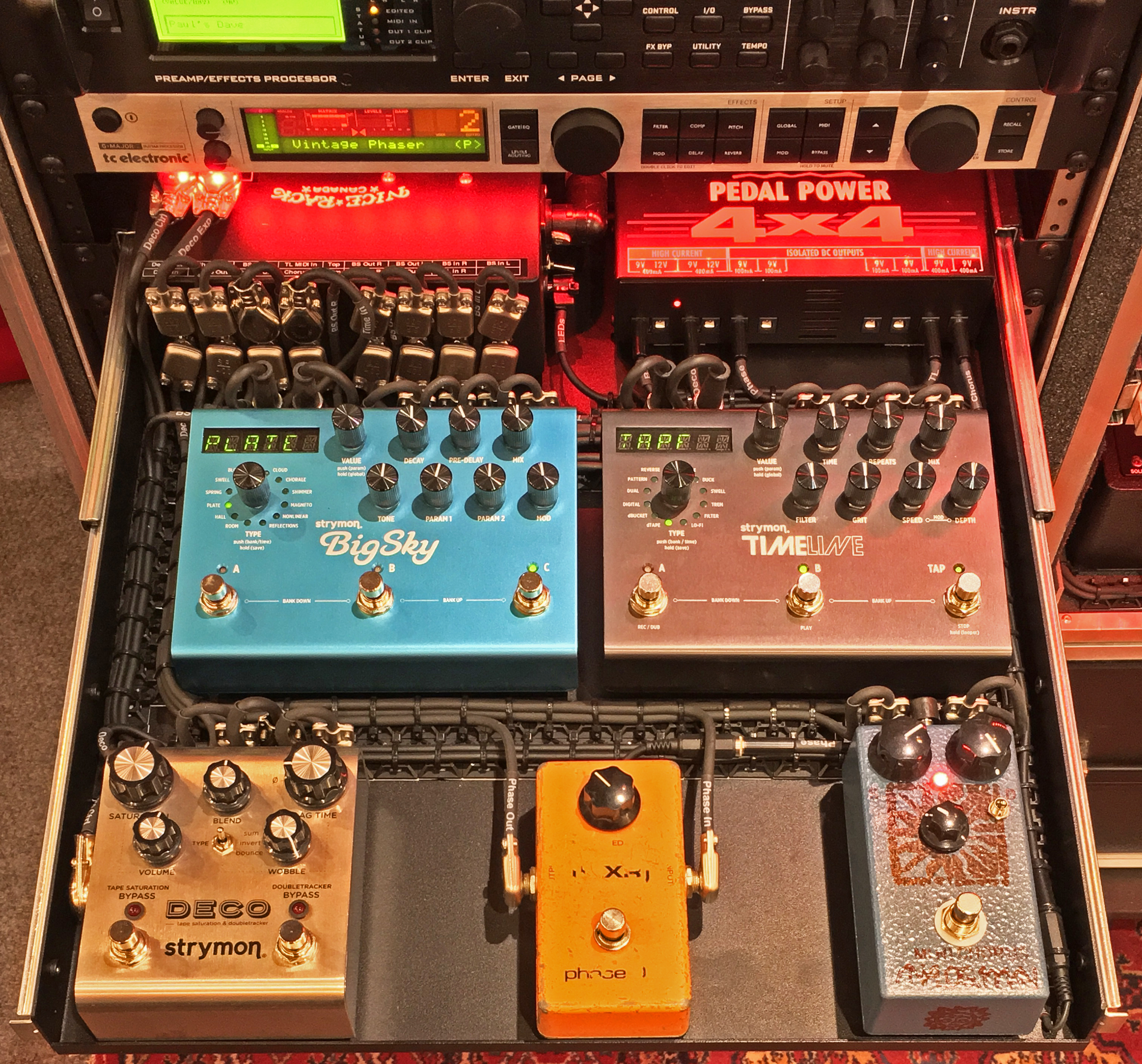 In Drawer #1 we have some modern classics by Strymon, the Big Sky, TimeLine & Deco. The Deco has been modded to accept MIDi control via an RJM Music Mini Amp Gizmo to engage the Saturation, Double & Favourite Functions.

The Analogman Chorus has a unique flavour about it that the client loves and it stands out from the other Choruses in the rig by Fractal, TC Electronic & Strymon.

The MXR Phaser has been owned by the client since it was brand new. To honour it’s history we replaced the bottom plate with a modified version that allows for connections to a regulated & isolated power supply without devaluing the enclosure. 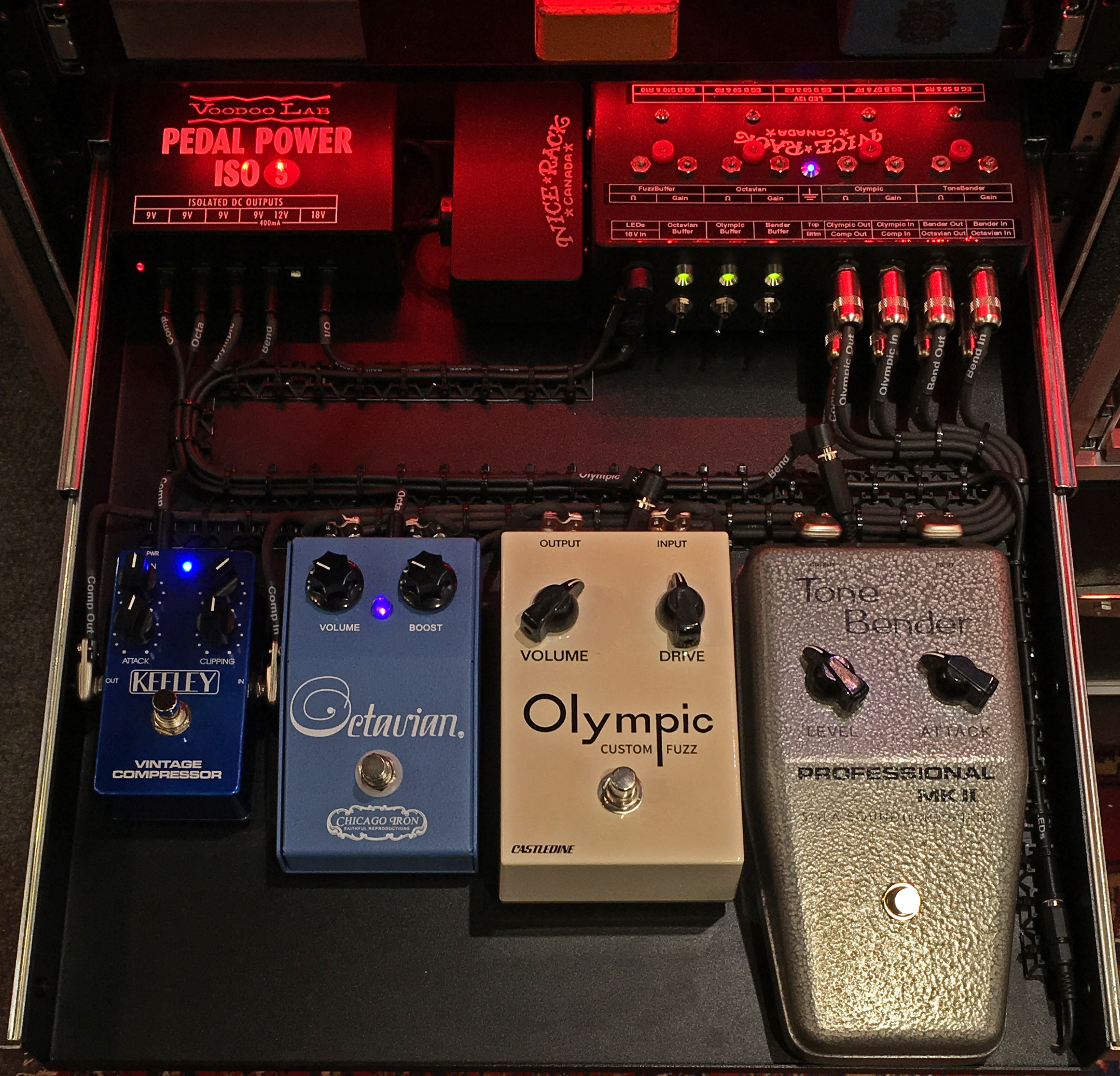 In Drawer #2 things get a lot hairier, and a little smoother.

The Tone Bender comes with a little modern rock history having been acquired from Mike Turner of Our Lady Peace.

Stuart Castledine’s beautifully crafted Olympic Fuzz takes the harmonics a little hotter. For convenience and ethics, we replaced the bottom plate with a modified version that allows for connections to a regulated & isolated power supply, while allowing battery source materials to be used to power the economy of the future.

Chicago Iron’s take on the Octavio cranks the harmonic stacking into “hang on for the ride” territory, with all the bliss you can imagine that the ride would bring.

Each of the Fuzz pedals has a custom Nice Rack Canada “Fuzz Buffer” in line before the pedal to optimize the input impedance to match the output of the client’s favourite Les Paul.

Regardless of which effect may be in the signal path before the fuzz, the fuzz pedal “breaks up” as it would with the Les Paul plugged directly into the fuzz.

Robert Keeley’s modern perfect take on a classic compressor provides the smooth. Just enough sponge to dig into without it getting annoying, and a super low noise floor. Keeley is setting the standard for independent brands making analog effects. 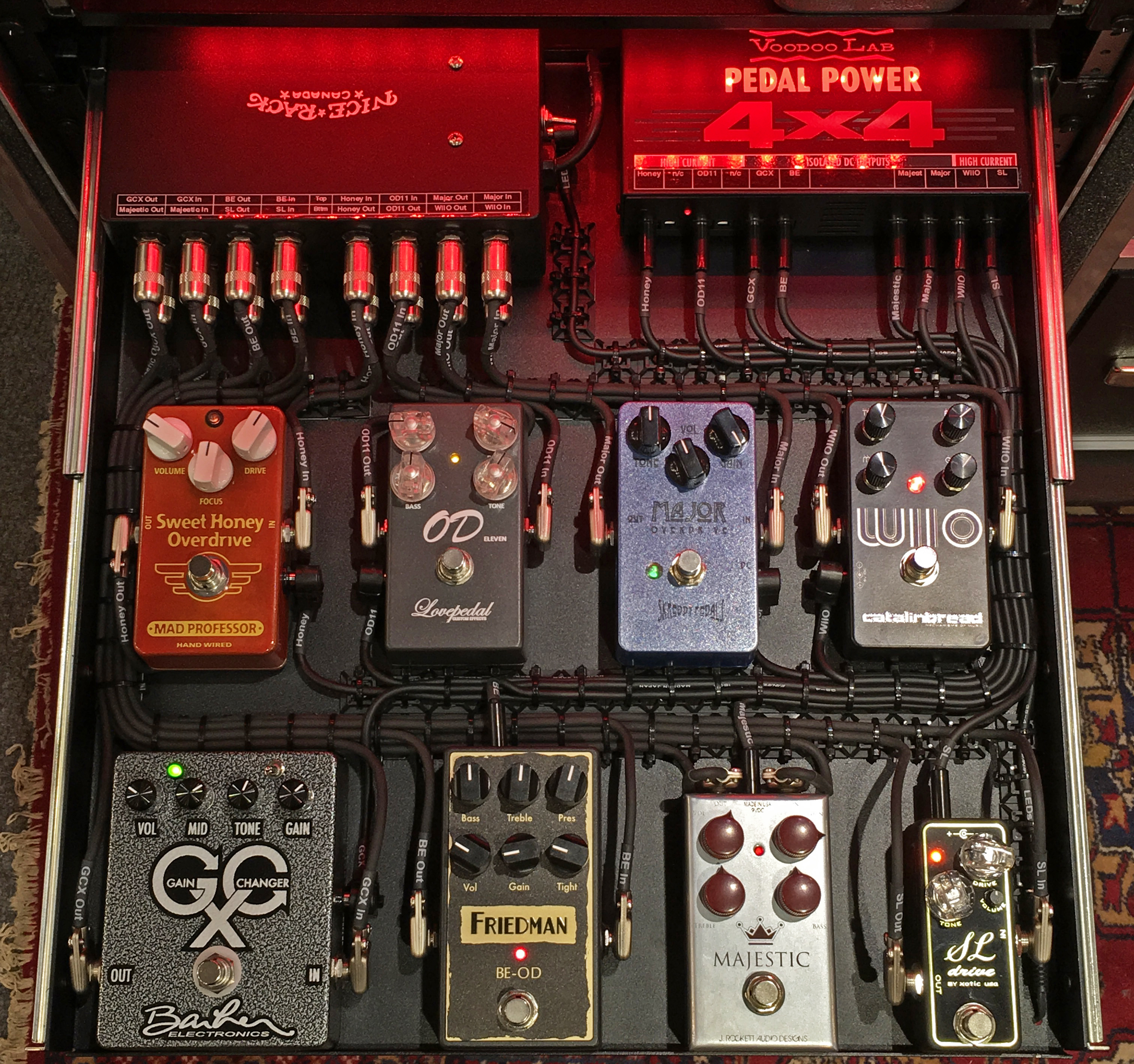 In Drawer #3, we’ve got a plethora of harmonic stacking devices from mild to wild. This drawer is wonderful snapshot of current guitar technology by some of the brightest minds of our time. Mad Professor, Lovepedal, Skreddy, Catalinbread, Barber, Friedman, J Rockett & Xotic, all competently demonstrating why they populate the rigs of pros who know and tone junkies that crave the good stuff. 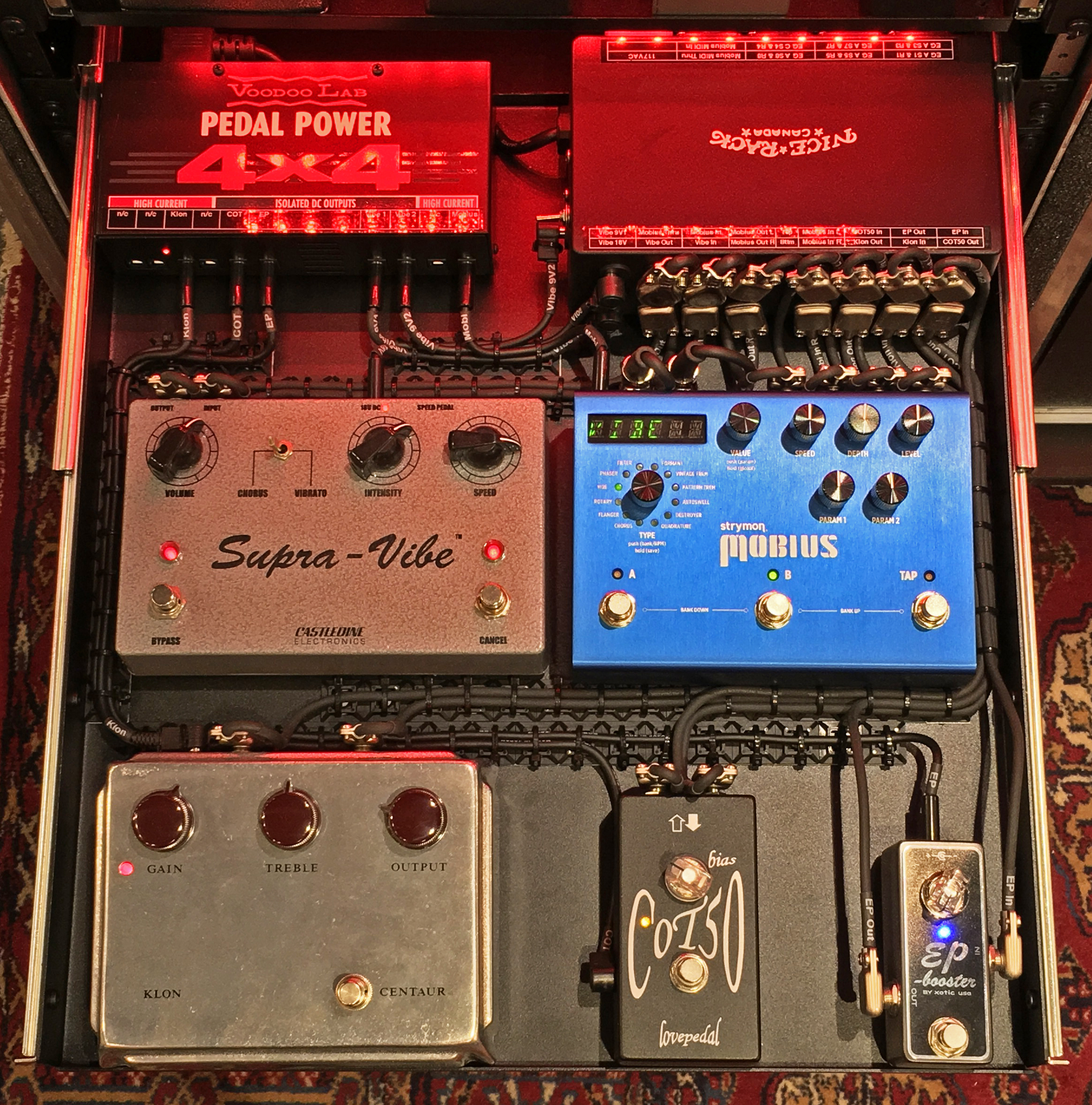 In Drawer #4 sounds wobble so pleasantly, they punch and they get creamy.

Stuart Castledine’s Supra Vibe will get you right into “Machine Gun” mode and we mean that in the most reverent way possible.

The Strymon Mobius provides a wide array of modulations with distinct flavours to separate it from the TC Electronic & Fractal Audio modulations.

The Xotic EP boost is used in unity setting to widen the bandwidth of the signal when desired.

The Lovepedal COT50 provides a nice punch to the front of the amp to take it from clean to breaking when pushed.

The Klon Centaur provides the creamy smooth breakup that has spawned a legion of follow on designs.

As you can see in each drawer, we used the often imitated & never duplicated power supplies by the legendary Voodoo Lab. 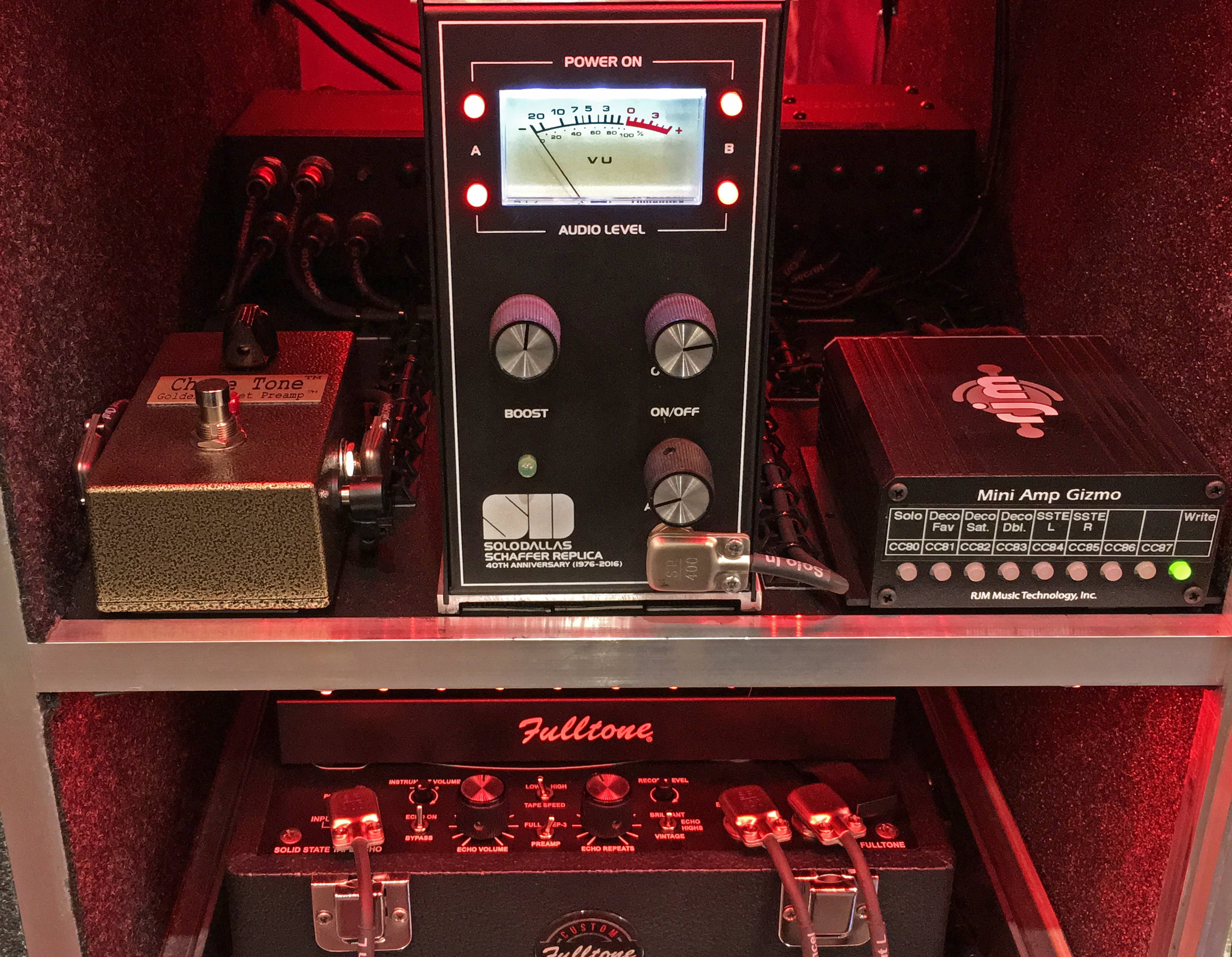 Tucked in next to the Solo Dallas Shaffer replica and the RJM Music Mini Amp Gizmo is the “secret sauce”, The Chase Tone Secret PreAmp.

The controller board for the rig features a Castledine Wah, TC Electronic PolyTune 2 Mini, modified Boss FV500 expression pedal and the last word in MIDI controllers.

When building a rig of this magnitude the only acceptable controller for the job is the RJM Music MasterMind GT-22.

We’ve been proud to be installed the MasterMind series of controllers dating back to serial # Beta 1 of the GT series, and serial #1 of the LT/7 & PBC controllers as well.

RJM Music’s contribution to guitar rig technology and the music industry is a unheralded accomplishment. RJM Music has made many things possible for guitar players that were but a dream a decade ago.

While RJM Music is a little over a decade old there is compelling testimony to say that they are setting standards that leave the competition far behind. Check out their pro users list and you’ll see exactly what we mean.

Regardless of what the criteria is for your rig, Nice Rack Canada can embrace it and expand it’s capabilities beyond your imagination’s limits.

Re: Nice Rack Canada | A few of our favourite things

Re: Nice Rack Canada | A few of our favourite things

Less than the value it has created for the user.
Top
Post Reply
3 posts • Page 1 of 1